Fast train to Berwick this morning. Gotho was a little disappointed that the railway company all those years ago had found it necessary to demolish the castle to facilitate the building of the station. I personally am quite entertained that the Great Hall is now the site of platform 2, but I think that highlights the difference between us...


Went for a cheapo breakfast at The Leaping Salmon - you can't be a Wetherspoons for its volume/price ratio, then fortified with coffee, headed out on to the Elizabethan town walls. Luckily for mum and her fear of heights, they're quite wide, and only about as tall as the top deck of the 121 to Brid, so they're not overly scary. I think her 2 double espressos helped too.

At the Cowport, we descended to ground level again, and had a look around St Mary's Church. It was built during the rule of Oliver Cromwell apparently, and is thus quite unique. 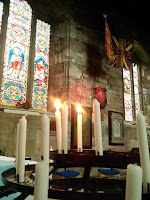 Mum lit some candles (technically I did actually, as I had a lighter). The Lady Chapel reminded me of a WHSmith railway bookstall.

We crossed the road, and went into the barracks to dry off for a bit. There's three museums in the complex. The first one is a bit weird. It has a giant walk-round model of the Laidley Worm. It's a large fabric and metal tube, with a face and a tail, lit inside with Chinese lanterns. We went in the wrong way, so effectively climbed into its arse...

The second museum was a bit boring. It was something to do with the history of war? Wasn't really paying attention. 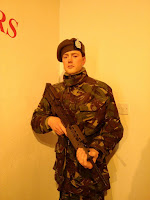 The third I found quite emotive. It was all about the Kings Own Scottish Borderers. I think the clothes got me. All the uniforms on display were roughly my size. Really got me thinking. A very moving experience.

We headed back out onto the walls, after Gotho had bought the requisite English Heritage fridge magnet (he'll need a bigger fridge soon), and spiralled round back towards the town centre.

Gotho was very cold and wet now, but Mum and I were still caffeinated, so we sent him back to the pub and we crossed the Tweed looking for a further station photo opportunity.

Opposite Berwick, on the south bank of the river, is the imaginatively named Tweedmouth, which until the late 60s had a station all of its own, being the junction for the line inland to Coldstream in the Scottish borders. It's been almost entirely erased from the landscape now, with the site occupied by a scruffy industrial estate. One of the units appeared to be closed so a small occurrence of trespass gave me a perfect photo opportunity.


The time was now right to rejoin Gotho, and return to Wetherspoons once more. Having visited the two most northerly locations of the North Eastern Railway, I ate the only suitable option... 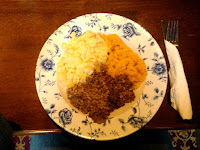 Email ThisBlogThis!Share to TwitterShare to FacebookShare to Pinterest
Labels: Berwick, Tweedmouth (for Spittal)