Yes, yes. I know it's been ages since I last did anything, and for that I apologise profusely from the bottom of my wine bottle.

Yesterday was a good day. Fried food was followed by a drive out in the country with les parents. Helmsley was the destination of choice. We arrived early afternoon. It was cold and grey. In fact, it was more than cold - it was shite. Especially considering it was June. I reckon Sean Bean is wrong - Winter isn't coming, it's already here.

But anyway, we managed about an hour of window-shopping before somewhere warm was required. Now, I don't know how many people out there have ever been to Helmsley, but if you have, you'll be aware that the majority of places are obscenely expensive. £9.50 for a bag of prawn cocktail crisps. That's a true fact.*


So instead of taking out a second mortgage, it was agreed we should go for refreshments elsewhere. My railway senses started tingling, but how to get them to come to fruition? JP is easy to persuade, obviously - the word "cake" is usually the answer, but Mum is more of a challenge (at least when it's a bit early for wine). The answer I settled on was Religion. Mum quite likes religion. I think maybe she was a member of the Spanish Inquisition in a past life ("If I can hear that in here, Baby Jesus can hear it next door!" - I may of course be paraphrasing). 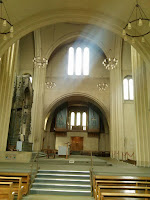 Ampleforth Abbey provided teacakes and warm drinks, and the opportunity for Mum to singe her hair on votive candles in a side chapel. And luckily for me and my conveniently placed 1933 Automobile Map of the North (it's looking somewhat worse for wear - the sellotape has dried up), they both agreed that I could go and take a tragic photo of myself at the old Ampleforth station. Huzzah!

Ampleforth station  is quite a long way from Ampleforth village (and even further from the Abbey and its associated College). It closed many years ago, along with the rest of the line from Thirsk to Malton, and to be honest it's not a huge surprise. Apart from the postman, who seemed determined to run me over, there was barely a sign of life anywhere. It's quite pretty I suppose, but not sufficiently glamorous and exciting enough to attract tourists in the same way the Lakes do, or the Peak District. Perhaps that's a good thing?

Next stop was The Fairfax Arms in Gilling East. As a reward for behaving, it was decided les parents could now have a drink. What I didn't tell them though, 'til the last minute, was the pub's proximity to another abandoned station - Gilling - the former junction for the line northward to Helmley and Pickering. The sun was out by now, and the day was looking more June-like (or at least certainly mid-March), so they sat outside by a sparkling stream, while I nipped off round the corner for some further bad photography, and possibly light trespassing.

Gilling, like Ampleforth before, is now a house, but is still quite obviously railway-ish. It even has a sign advertising passengers to only cross the line by means of the footbridge. Easier said than done, considering it's been dismantled and turned into a weird Pink-Floyd-esque wall...

But anyway, that was it for the day. All that remained was a quick scampi-in-a-basket on the A170, and back home to feed the cats.

And again, sorry it's been such a long time...