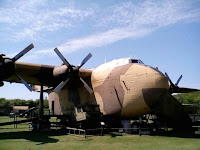 An unintentional bit of Platform-Cattery happened on Tuesday. Thom and I went for a trip to Fort Paull, near Hull, to relive a bit of my childhood. When I was a wee bairn (?) I made several visits to the erstwhile Museum of Army Transport in Beverley, where the main attraction was a large grounded aeroplane - a Blackburn Beverley, no less - which one could go inside. It is now in the aforementioned Fort - a Tudor/Napoleonic/WW2 military establishment on the banks of the Humber - and one can still look inside. It hasn't changed, except I remember there being more headroom. 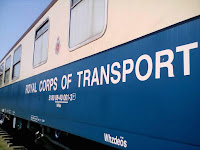 But anyway, train-wise, apart from a Military Transport Corps dining carriage, Fort Paull is a bit of a non-starter, having never been connected to any sort of railway network. It more than makes up for it in amusement value though. Another attraction from the time when I was a wee bairn (??) was the Friargate Wax Museum in York (also closed. Flippin' 'eck I'm getting old). If one ever wonders where old waxworks go when they die, then we have the answer - and that answer is Fort Paull! 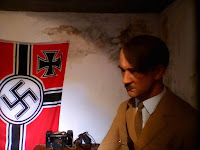 Some of the waxworks make sense - Henry VIII is fairly relevant to a Tudor fort, obviously, and a tableaux featuring Queen Victoria can be fitted into the timeline, as can that little Austrian bloke with the bad hair and the funny
'tache. Some of the others however... Hmmm...

One of the rooms featured a model of Queen Henrietta Maria, which looked suspiciously like Princess Di in a drag outfit, and the wax model of a blacksmith making horseshoes may, or may not, have once worn a glittering shellsuit and lots of gold jewellery... Now then, now then...

But anyway, I digress. After the excitement of seeing a host of upcycled 1980s celebrities, we had a drive down to Holmpton, to the well-signposted Secret Underground Bunker, and in doing so, almost ran over a chicken while doing a thirteen point turn at Keyingham old station, enraged a massive dog at Ottringham station, and committed some minor acts of trespass at Patrington.

All three stations were once on the line from Hull to Withernsea, built by the Hull and Holderness Railway and opened in 1854. The last passenger train rain in 1964, with complete closure a year later in 1965. There was a further station between Ottringham and Patrington - namely Winestead - but as I was navigating using my Yellow 1930s Map we missed it completely, it having closed in 1904 and thus not being marked. Bugger. I suppose it's quite appropriate though as I'm off alcohol this month. One for a future visit...

Anyway, the Secret Underground Bunker was shut, so we went to Hornsea and ate pies. A fine end to the adventure.
Posted by PlatformCat at 17:50 1 comment:

Further adventures with Thom - no particular plan in mind, other than driving about. Basically I enjoy any excuse to mess about with the SatNav, and Thom is a willing victim travelling companion.

First of all I programmed us to go to Muker, in upper Swaledale, but changed my mind, and we switched it off altogether. I had my yellow 1930s Bartholemews Touring Map, so we wouldn't get completely lost... First diversion was Redmire, current terminus of the Wensleydale Railway and also loading point for Ministry of Defence artillery trains, but alas there were no tanks (much to Thom's disappointment), and heritage trains weren't running either. The dogs were were pleased to have a run about on the car park though.


The main station building is now owned by the Scouting Association, and sees (during the season) trains coming up the valley from Leyburn and Bedale, but it was formerly a small intermediate halt on the line from Northallerton on the ECML to Garsdale on the Settle-Carlisle, and closed to British Railways services in the 1950s. I'll have to come back again by train one day. 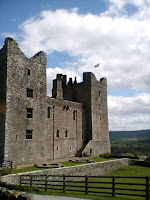 Just around the corner from Redmire, is a place who's name should be very familiar to Game of Thrones fans - the small village of Castle Bolton. Curiously, the castle in said village is named the other way round - Bolton Castle. It's a great place to visit. The castle is huge, and a good combination of ruinous and restored - I was particularly enamoured of Mary Queen of Scots' bedroom - with other interesting attractions in the grounds, such as
wild boars, falconry displays, a vineyard and a dyer's garden.

There's a very well-stocked gift shop - I was seriously considering buying a drinking horn, but eventually decided on a handmade jug instead - suitable for mead or wine I reckon.

We didn't make use of the tearoom, but hopefully, if there's sausage on the menu, it isn't the same as those on Game of Thrones... Ouch.


After an hour or so, we tootled off, further up the valley, passing some nice waterfalls, a good selection of fighter planes, and a hell of a lot of sheep. Next stop was Hawes - but not for cheese, I can't abide Wensleydale cheese (or Cheshire, if you're interested). The old station there is now the Dales Countryside Museum, and was formerly the boundary between the North Eastern and Midland Railways. The NER provided all services eastbound and the Midland all to the west.

There's a train parked in the platform, with three carriages used as exhibition space for the museum. I had a look inside - quite an interesting array of things including old church fittings, taxidermied animals, and a curious musical instrument known as a "Serpent". It was only as I exited the carriage nearest the engine that I realised I was supposed to have paid... Oops. 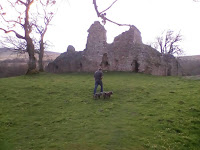 We made a speedy getaway up to the dale head, and then zoomed along the reasonably flat road across Mallerstang Common, all the while running parallel to the Settle Carlisle line. No trains passed us, sadly, but there were some cool viaducts to look at, and we got a chance to explore the ruins of Pendragon Castle. It's fairly small - more of a fortified manor I suppose - but the dogs (and Thom) appreciated the chance to stretch their legs and have a wee (that part, Thom didn't do...)

Last station visit of the day was Kirkby Stephen - later renamed Kirkby Stephen East. I had actually been here once before, in the late 1990s, when the station was abandoned, used only as a bobbin mill for a long time. Now it is run by the Stainmore Railway company, and is being developed as a museum with train rides available. Alas, it being a Wednesday in May, it wasn't open to look round, so I had to make do with a rather dreadful picture of myself outside the main gate. 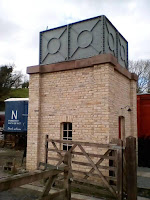 Kirkby Stephen (East) used to be a fairly major junction. Trains from County Durham, across the Pennines, could continue west towards Tebay on the West Coast Main Line, or could turn northwards, up the Eden Valley towards Appleby and Penrith. Nowadays however, they can only go couple of hundred yards, then turn back, but the plan is to extend the line as far as finances allow. They have recently built a large modern engine shed, and have constructed a traditional water tower, using the tank from Wharram
(on the Malton to Driffield line), and reclaimed bricks from Barras...

But wait! On the return journey, we called at Barras again! Hurrah!

And this time I haven't deleted the picture in error, and it isn't foggy so it's even possible to see the background! Admittedly I look like an extra from Last of the Summer Wine, but you can't win 'em all...
Posted by PlatformCat at 17:31 No comments:

Last Tuesday, Thom and I had a free afternoon, so went for a drive into the Dales. The scenery may have been stunning, with expansive moorland vistas all round, but I couldn't tell you, 'cos it was thick fog for the entire journey. 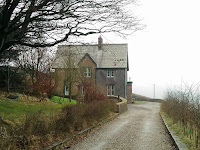 We went across to Barras, way up in the high fells of Cumbria first - and irritatingly, although I took a photo of myself, I accidentally deleted it in the uploading process, so at some point I will have to go back - perhaps when the weather is better. But anyway, for now this will have to do. This is the former stationmaster's house, on the westbound platform. There was a cat hanging around, but it fled at
the sight of Thom's dogs, so no photo of that either. 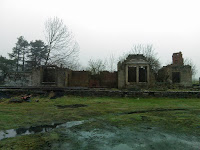 On the way back, we came back along the A66 - joining a speeding flow of heavy traffic in a thick
pea-souper was quite a hairy experience, but I'm not dead, so we obviously did something right. We stopped off to have a nose around Bowes. It's over twenty years since I was there last, and it's not looking at its best. The Pennine weather is definitely taking it's toll.

Took an updated photo - I'm not sure I'm ageing any better than the stonework, but I'll blame that on my phone camera. The selfie mode is always considerably blurrier (Is that even a word?) than the normal side. Perhaps I ought to invest in a new one. Ugh.

Posted by PlatformCat at 11:52 No comments: