I think my shoes change shape when it's damp. Yesterday morning I walked the 4 miles (maybe 5? Dunno - haven't accurately checked) from my current holiday abode to Warkworth Castle, and by the time I got there, my left foot had a tiny blister on one of the toes! This is a rare occurrence so am blaming the misty conditions... 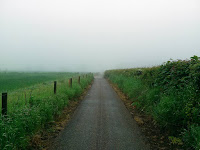 But yeah, I digress. The original plan was to go by bus, but Exciting New OS Map™ persuaded me to walk. The first couple of miles were along an obviously fairly new section of the Northumberland Coast Path. I would like to extol the beauty of the views (reportedly magnificent) but due to weather conditions it was a similar experience to walking through old bathwater. 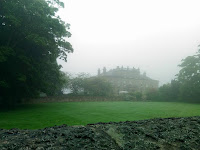 After a while I turned inland, and up an avenue of trees - I think they were horsechestnuts - leading to the main gates of a minor stately home (Shortridge Hall), then past its associated outbuildings and coach houses, to a pleasant lane running parallel with the East Coast Main Line. 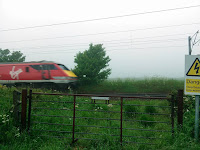 I like roads that run next to railways - I always find it very exciting when a train passes me. It's one of the main reasons I bought my flat. True fact. So walking along this obscure Northumbrian byway, with expresses to London, Scotland and elsewhere whizzing by at regular intervals, was pretty cool.


After another while I arrived at what was formerly Warkworth railway station. It's been shut since 1958, and from the roadside now resembles a large country mansion, albeit one with Intercity 225s zooming through its back garden every couple of minutes. Whoever owns it is clearly minted. Their dog did not like me - it started yapping at me from the glass doors at the top of the entrance stairs. A canine translator would undoubtedly say "Get off of my land!"


I walked the last mile and a half into Warkworth. No wonder the station closed - really not convenient for the local residents. Much too far out of town. I met up with Mum and Gotho for a coffee at The Hermitage Inn, before continuing up the hill to the castle, where I proceeded to behave like a caffeine-fuelled nine year old, let loose on the set of Knightmare. It's a pretty awesome castle...

Email ThisBlogThis!Share to TwitterShare to FacebookShare to Pinterest
Labels: Warkworth