Behold! The first post to include an actual train journey!

But first - here's a picture of me looking like Mr Potato Head.
I didn't have time to get any other pictures at Scarborough station this morning, as I was catching the 10:00 Yorkshire Coast Pullman (I totally made that name up) to Filey. Actually, when I boarded I noticed the train was called "Jane Tomlinson". Not sure who she is, but I'm sure she's very flattered to have a train named after her, even if it was just a Northern Rail 158.

The journey was uneventful, and took a mere 15 minutes or so. I've been travelling this particular stretch on a regular basis for about 20 years, and it's nearly always uneventful - the only two memories of note are the time we were delayed due to an abandoned canoe on the line, and the time we ploughed through a flock of escaped sheep, but I digress...

Apparently there's some sort of heatwave going on this weekend across the country. Clearly nobody has reminded Yorkshire. It's been cold and misty and damp all day, but I fortified myself with a Bacon, Sausage & Mushroom sandwich from Cooplands (and 5 cheese straws - Nom!) and a cup of tea at Mum's house, before heading off on my way.

The way out of Filey is, honestly, pretty boring, in a pebbledash sort of way, and I didn't even see any llamas through the hedge at the Animal Park. Gutted! However, near Muston crossing, I did manage to get a photo of a train (11:27 from Scarborough, if you're taking notes).

So anyway, Gristhorpe was totally deserted. It was like walking through a film set - or perhaps a closed down version of Beamish. It's actually really pretty (Might start a "Visit Gristhorpe" campaign) - I'm sure if it had a better name people would visit it. I believe it's of Scandinavian origins, meaning "Pig Village". Nice.

The old station (Closed since 1959) is quite a way through the village and out the other side, on a dead-end farm track, and surprisingly still has a manned signalbox, with proper level crossing gates and signals and everything, but still no people. The 'box door was ajar, but I couldn't see where the signalman was - perhaps using his new outside loo?

The station buildings themselves are all still intact, and used as a house, but look a bit creepy. It looks like sort of place a witch might live, or maybe Josef Fritzl, so I didn't loiter for too long, and in any case I still had many miles left to walk, and another station to pose beside. But first, a rural interlude... 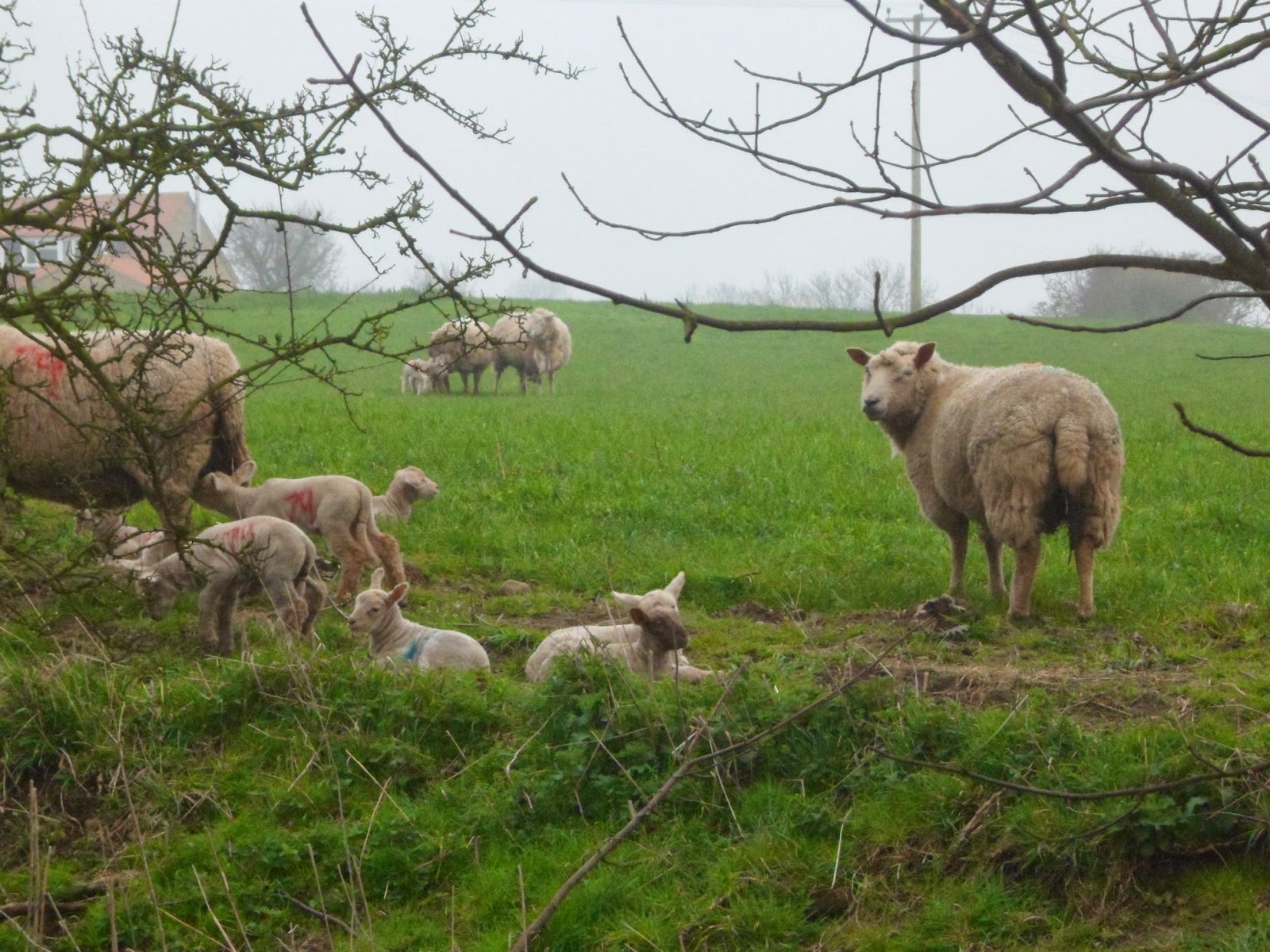 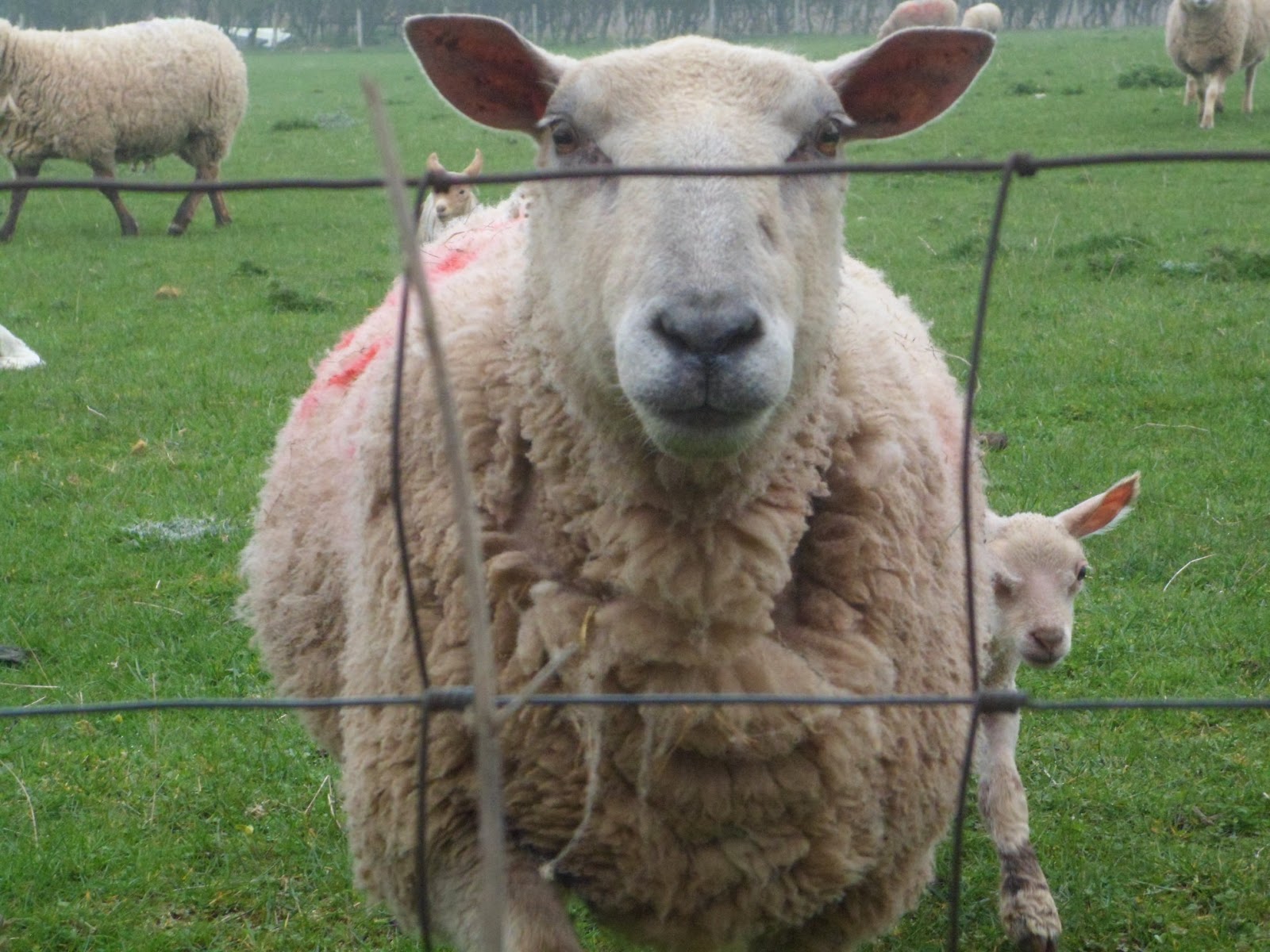 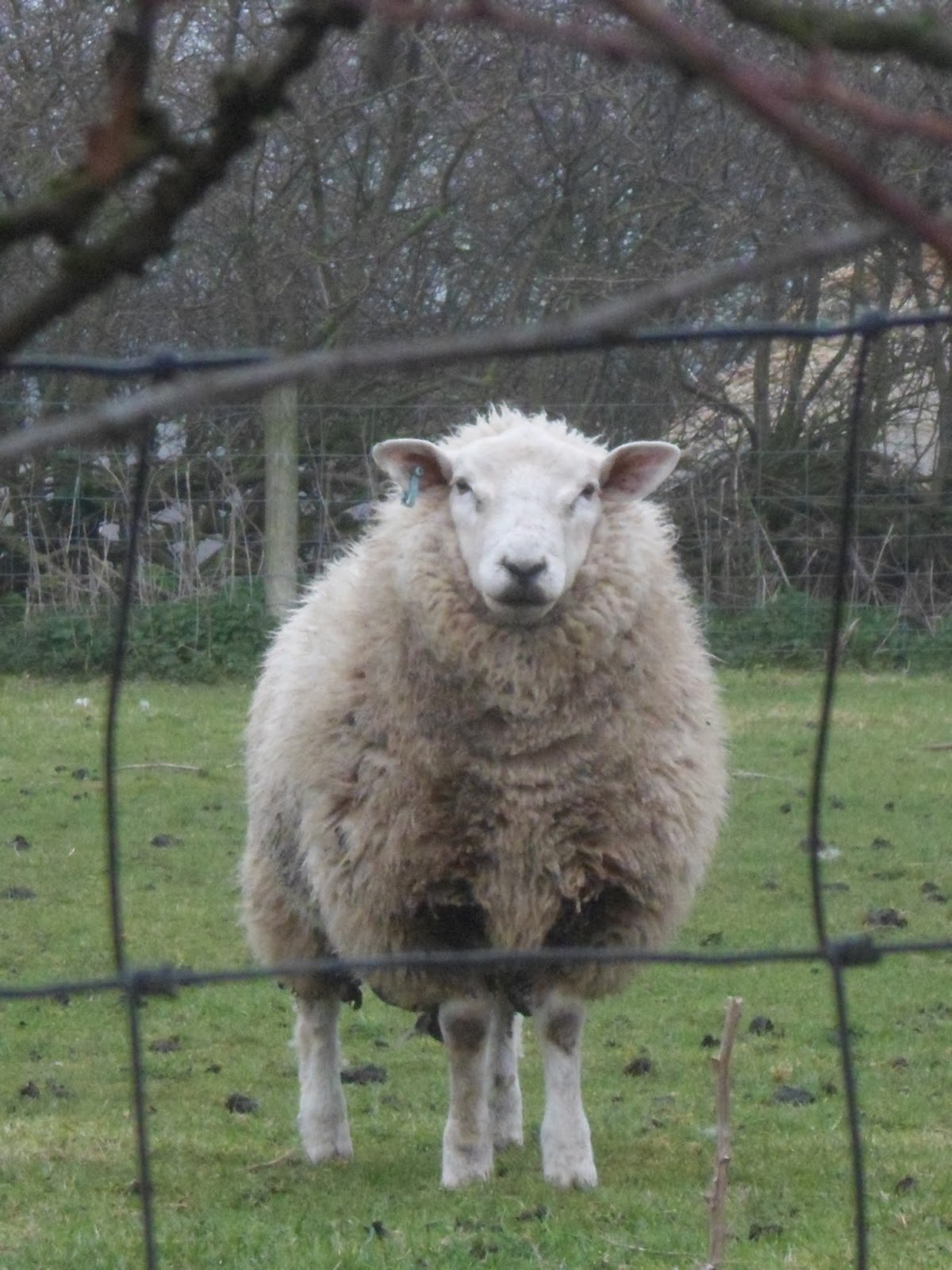 Right, I have a confession. This is probably going to sound weird and pervy - and it's not meant to - but I seriously love sheep. Not in a sex way - I'm not from Wales - I just think they're amazing! I like their noses, and their little twiggy legs, and their slightly demented eyes, and their general fat, cuddly squishiness. Sheep are awesome. (Actually, I think the one in the right hand picture wanted to kill me - I was quite relieved there was a fence in the way).

The walk through Lebberston enabled me to indulge my sheep-admiring, as there was a veritable sea of them, as far as the horizon - or at least 'til the edge of the mist. Big sheep, small sheep, medium sheep. A cacophony of baa-ing!

Cayton station (closed in 1952) was something of a disappointment - it's only visible from the roadside, not from the platform side, so consequently looks like I'm just standing in front of a fairly ordinary house.

The side facing the railway line is actually quite nice - when I used the line daily to go to college it was still visible, with very nice proportions, with a vaguely classical air to it - but sadly some bell-end the current owners have obscured it with massive fast-growing leylandii. Do these people not realise that God only invented leylandii to hide council houses, not nice buildings??? Bastards! 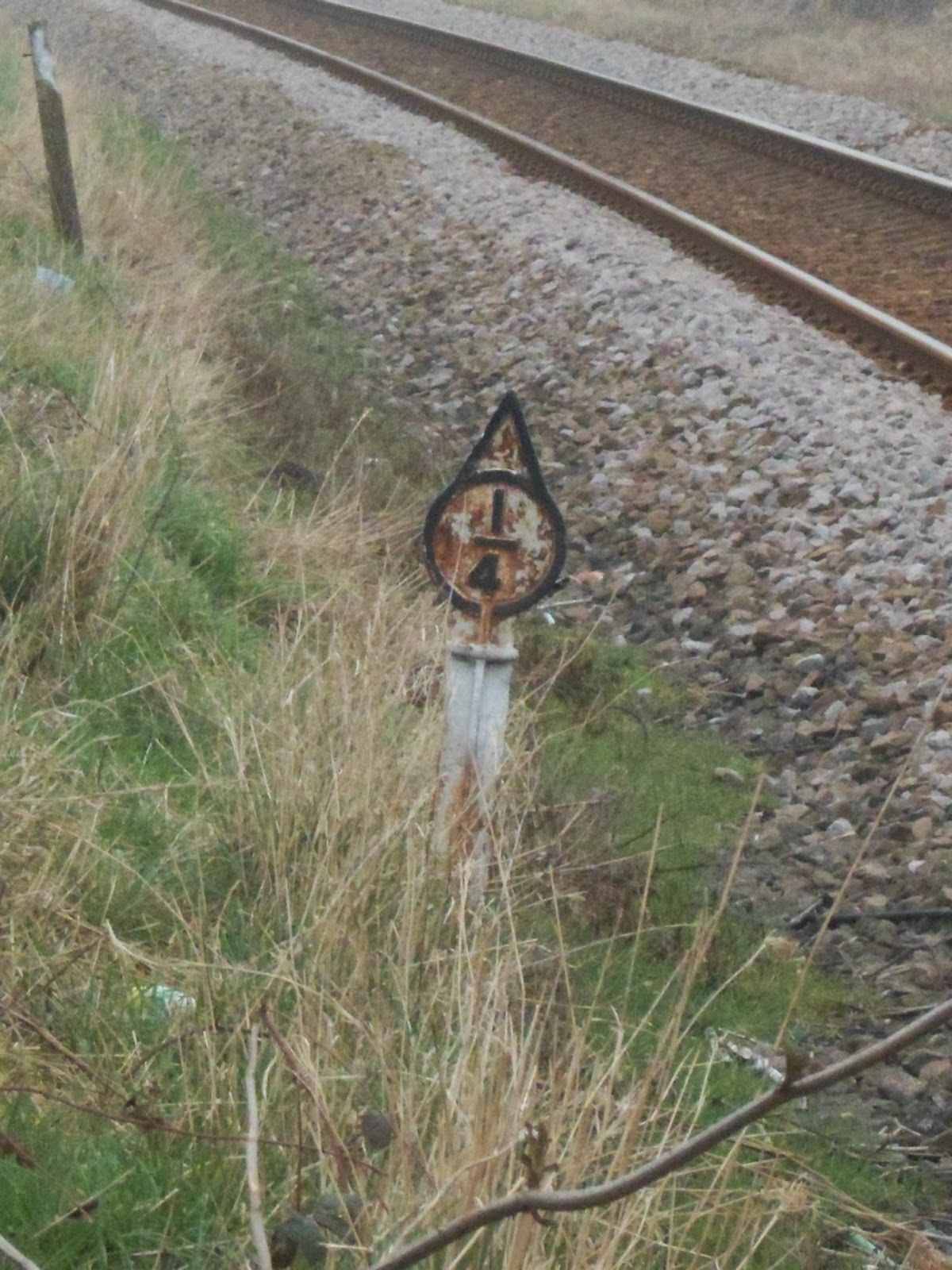 The only thing in Cayton's favour is that there is one of these visible from a non-trespassy location. I like the old North Eastern Railway's mileposts so much more than any others. I think they have character. This one - denoting (obviously) a quarter-mile point, reminds me of either some sort of prehistoric spear embedded in the ground, or a little man in a pointy hat.
The whole-mile posts are square, with the number of miles (not just the fraction) and the name of the place they measure the distance from in raised letter at the top. Very sensible and practical.
The half-mile posts are a bit like the one above, but with two points - one on either side - and look a bit like they've been given a bad centre-parting.
The three-quarter ones are just awesome - they have three spikes, so they're like some crazy cast-iron disco-flower planted by the tracks. I reckon if mileposts had a party, the three-quarter ones would be the coolest to hang out with, and probably sell you the best drugs too!

So that was the main part of today's task done, all that was left was to head back home, through a dull bit of suburbia, over the new road (when will I stop thinking of it was the new road? It's been there at least five years now!), and past the cheapest, crappiest temporary bus stop I have ever seen in my life. Oh dear... 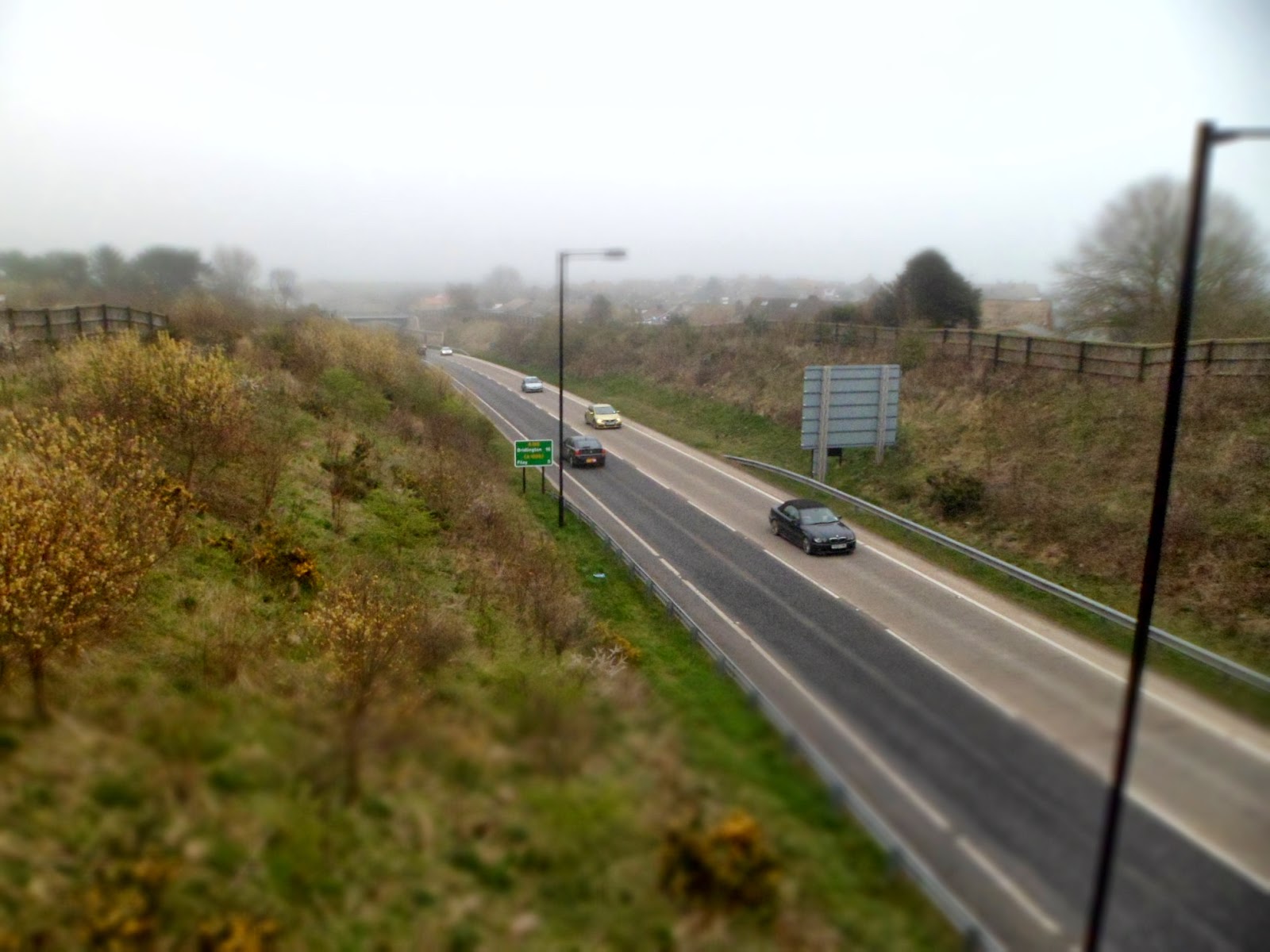 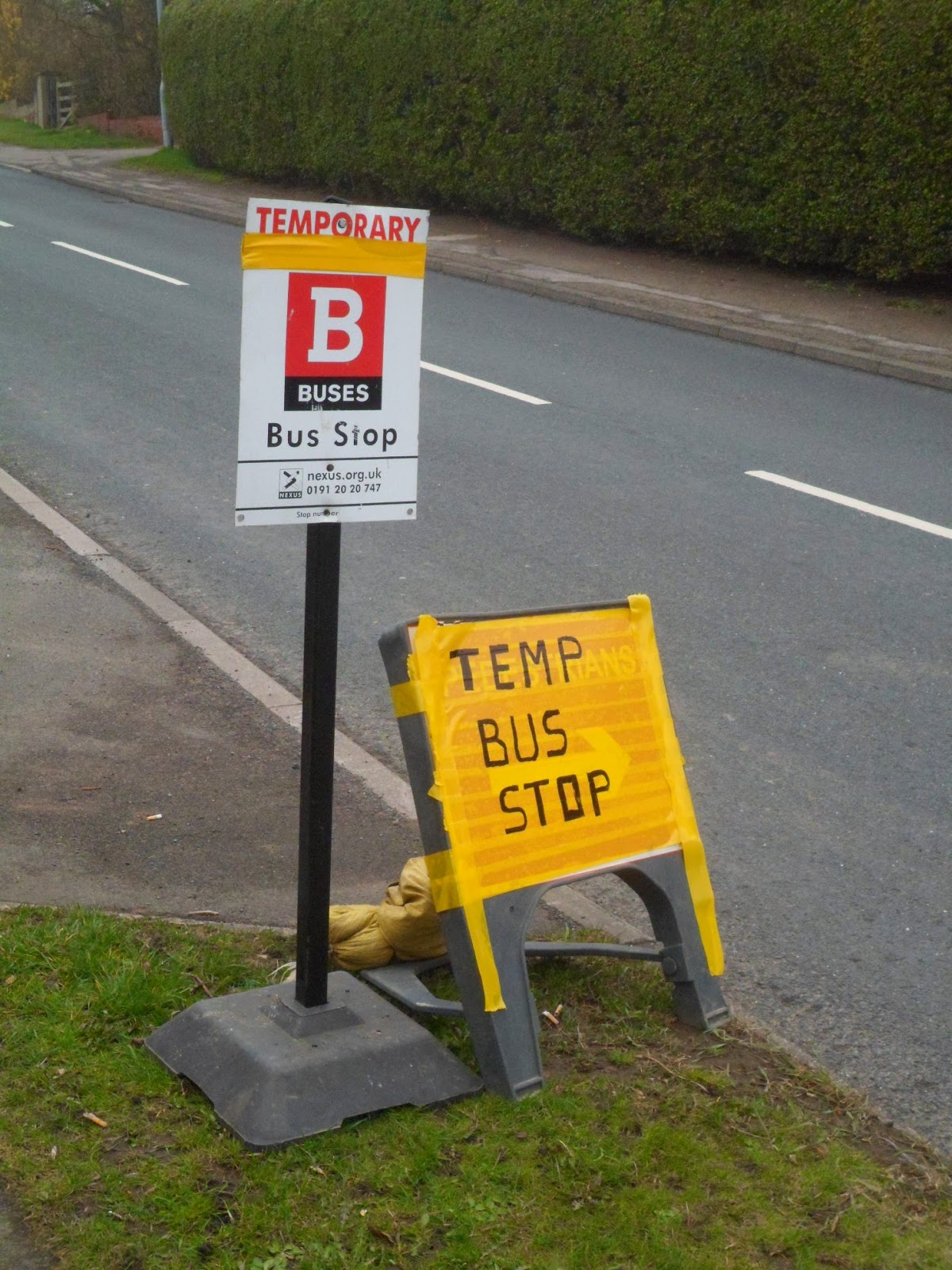