No new stations today, but keeping with the railway theme, Faux-Bro and I went out for an adventure, exploring the innards of the Yorkshire coast. 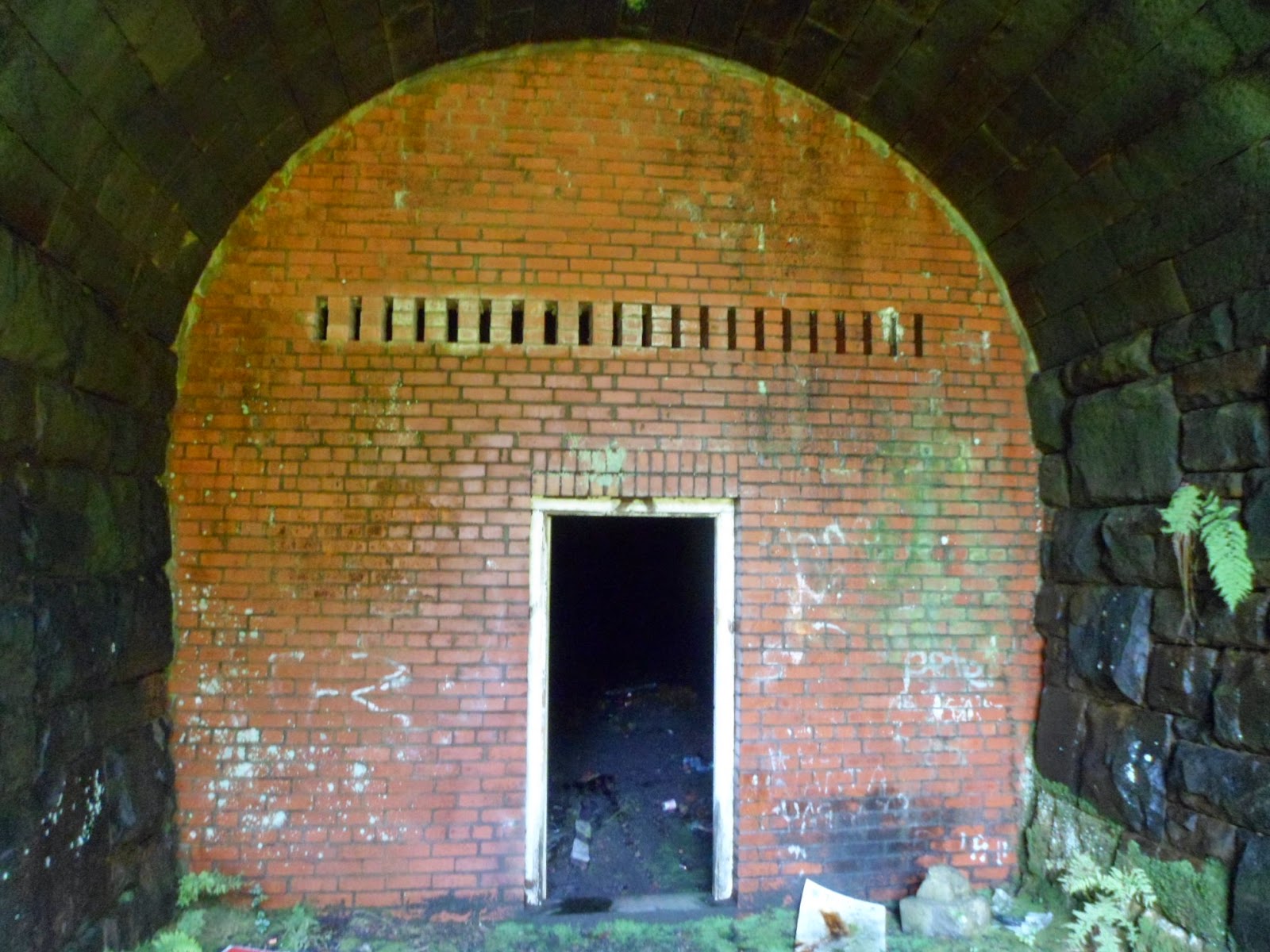 First of all we walked the length of Ravenscar tunnel - luckily this time round I had brought a torch. Faux-Bro had a torch too - his was a proper big manly torch, with two beams, all in black, from a hardware shop. Mine is small, pink and white, and if you press the button more than once it turns into a pink flashing glow-stick...

So anyway, the pair of us and my Homosexual Torch clambered down the side of the cutting, into the undergrowth. Sensibly, for once I was actually wearing jeans so the nettles didn't affect me, and for a change Faux-Bro was the one in shorts - but his legs are so hairy (practically knitted!) he didn't seem to be affected.

Ravenscar tunnel is in surprisingly good condition inside - all the guidebooks and websites advise against going in, because the bricks are reportedly falling out of the ceiling, but personally I think they just say that to put people off, as it doesn't really lead anywhere in particular, so you have to come out the way you came.

With our appetite for dripping gloom whetted, it was just a quick drive up the coast to Kettleness, to inspect the tunnels there. After parking up on what was possibly somebody's lawn, we had a short stroll - half a mile or so - along the clifftop path (part of the Cleveland Way) to the tunnel mouth. The path turns inland by a disused railway overbridge, and then climbs up some new-ish steps cut into the side of the embankment, onto the trackbed. Or that's what I first thought - the embankment at that point is actually the old route...

When the Whitby Redcar & Middlesbrough Union Railway was being constructed, back in Victorian times, the original plan was to run the line on a shelf cut into the cliff face, overlooking the sea, but before it was even finished, there was a big storm (or maybe a landslide) and the whole lot fell down on to the foreshore, so the plans were redrawn and the route burrowed underground instead. The embankment the aforementioned steps lead onto is actually part of that original failed line. The newer route is further inland, across a field of cows (or at least, a field of their shit). 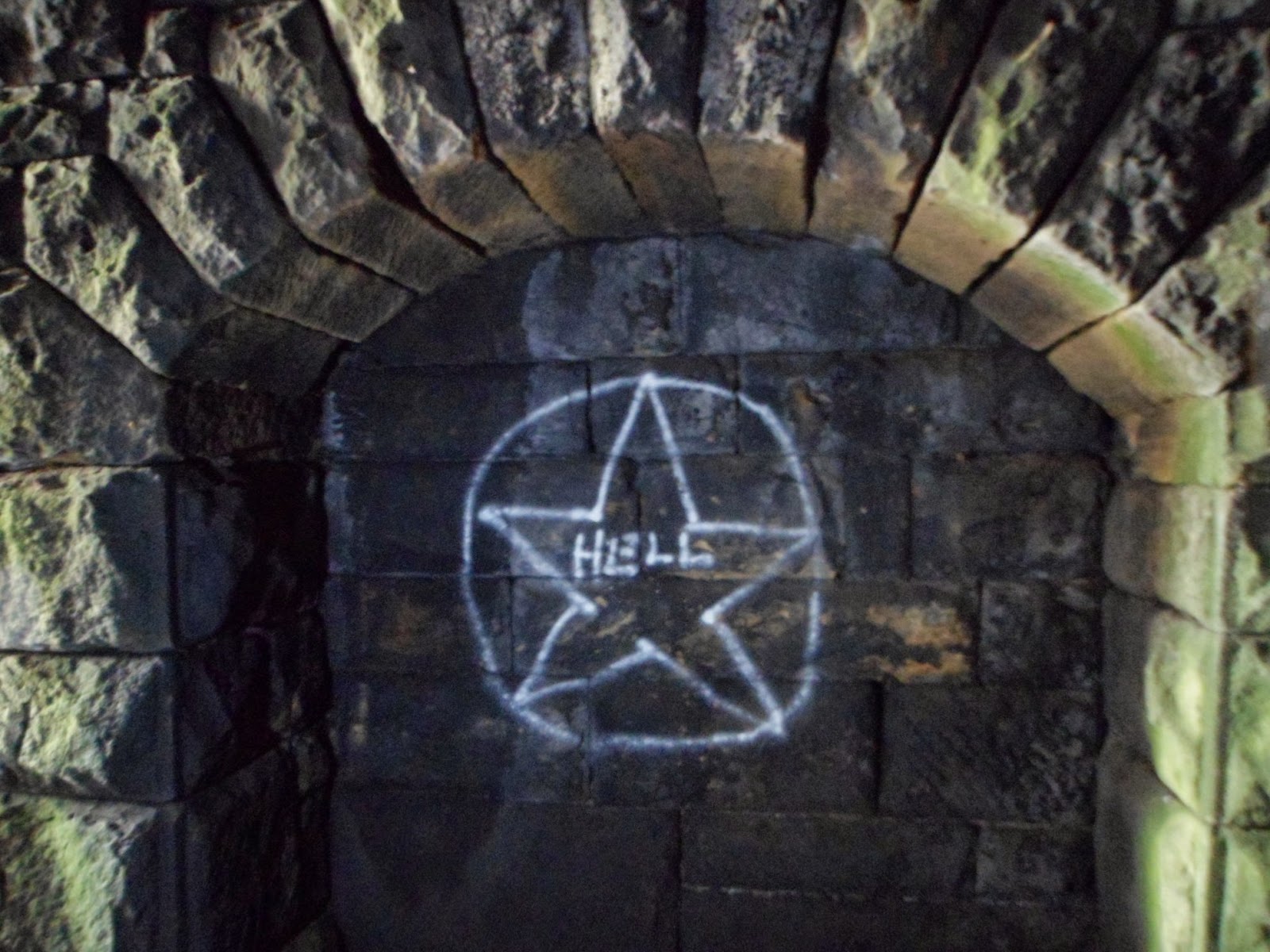 Kettleness tunnel is longer than Ravenscar - with a lot more refuges constructed along the sides. Several of these have now got graffiti adorning them, which kept me entertained. Like a really dark modern art gallery, designed by Hell's Angels perhaps. 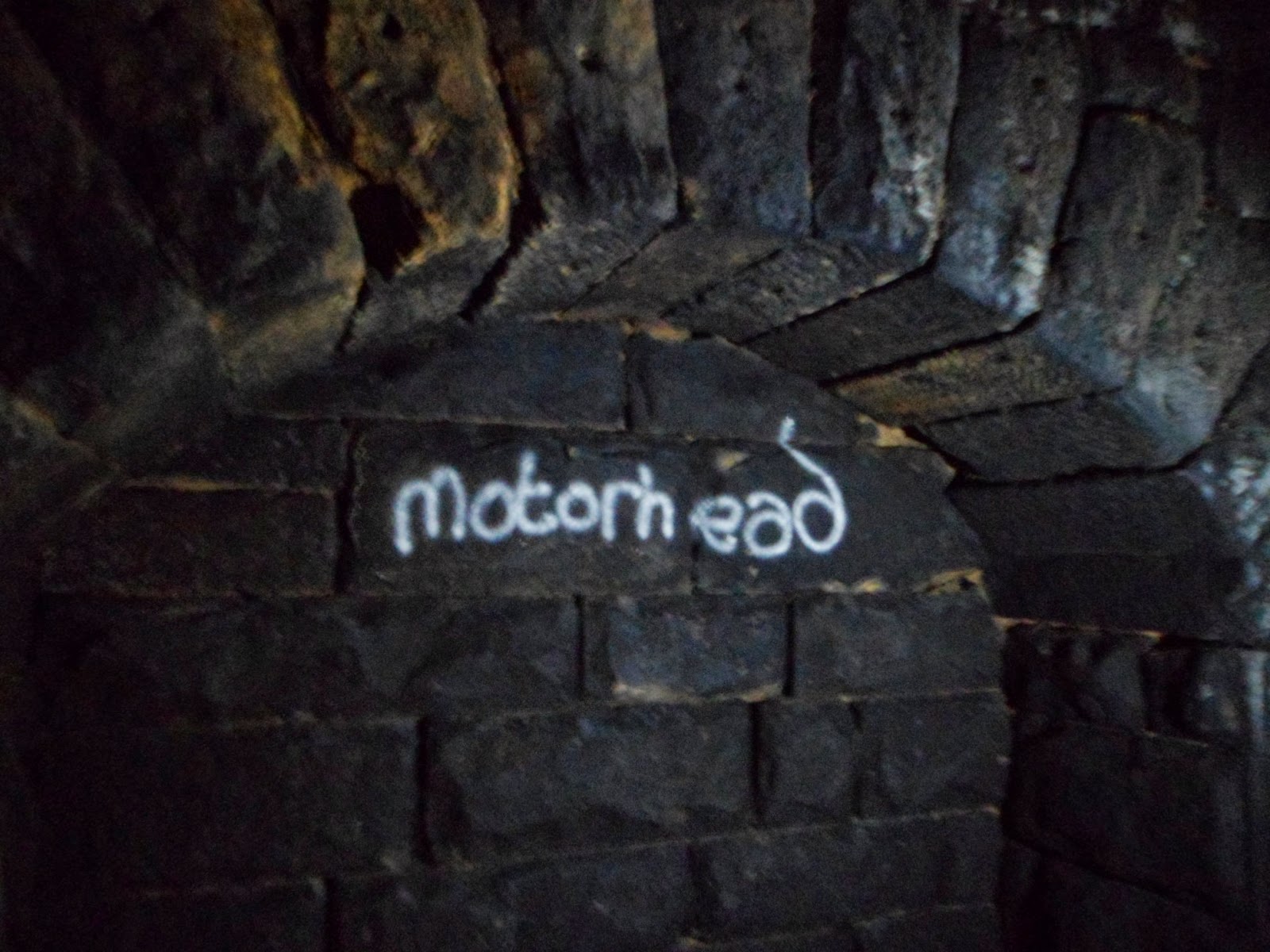 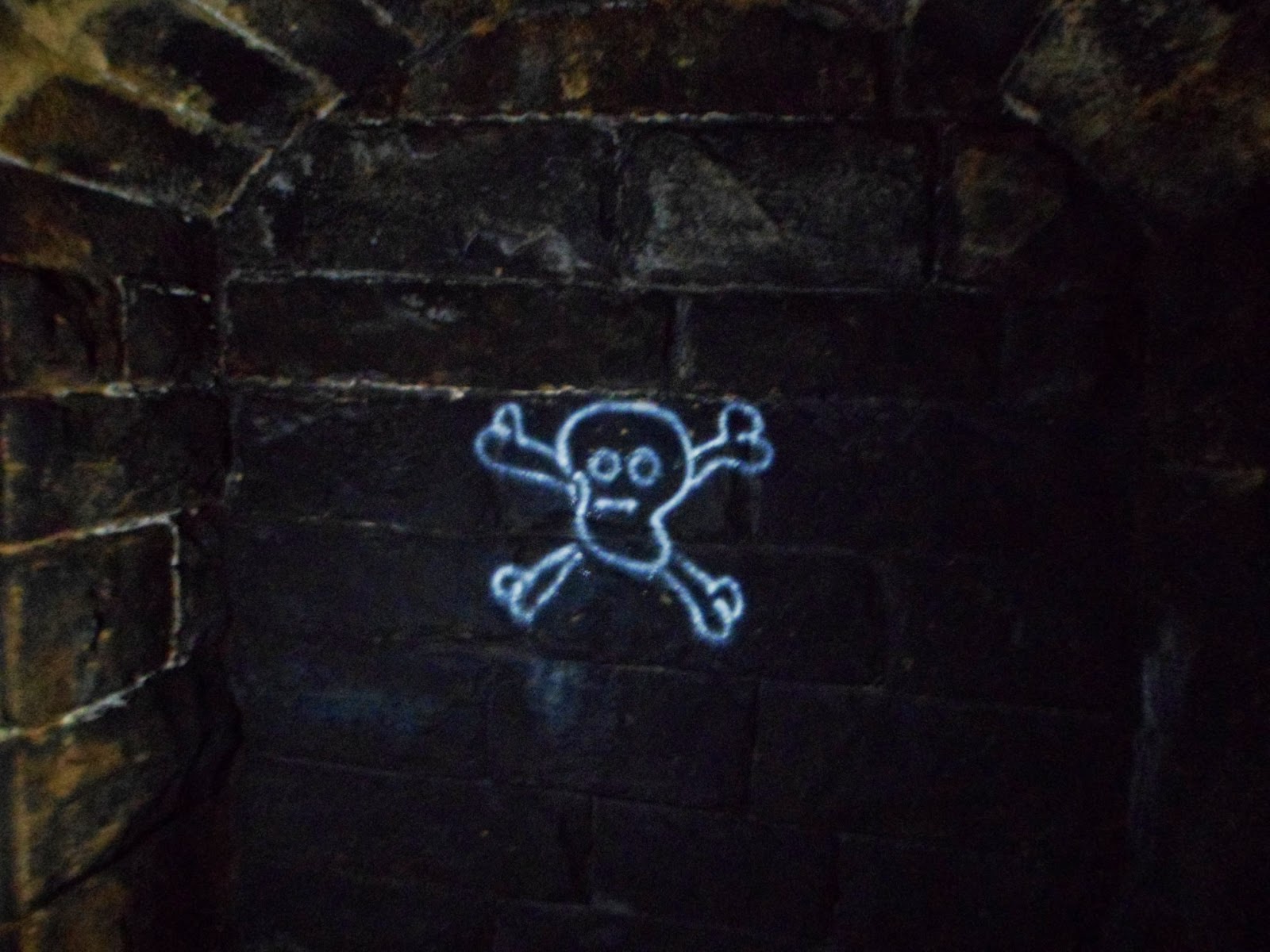 I was quite saddened that their wasn't more vintage litter scattered about - the main items seemed to be empty Carling cans, and Capri-Sun packets. There was nothing even half as interesting as the bones we found in Burdale... Perhaps the local residents are just less weird?

At the far (southern) end of the tunnel, the railway used to run on a shelf for a few hundred yards, before entering the much longer Sandsend Tunnel, emerging into daylight once more at - trumpet fanfare please - Sandsend... Alas, we couldn't go any further towards that, as the foliage and vegetation was just too jungley. And anyway, apparently the north portal of Sandsend tunnel has partially collapsed, and I have no wish to get crushed under several hundred tons of finest Yorkshire sandstone... 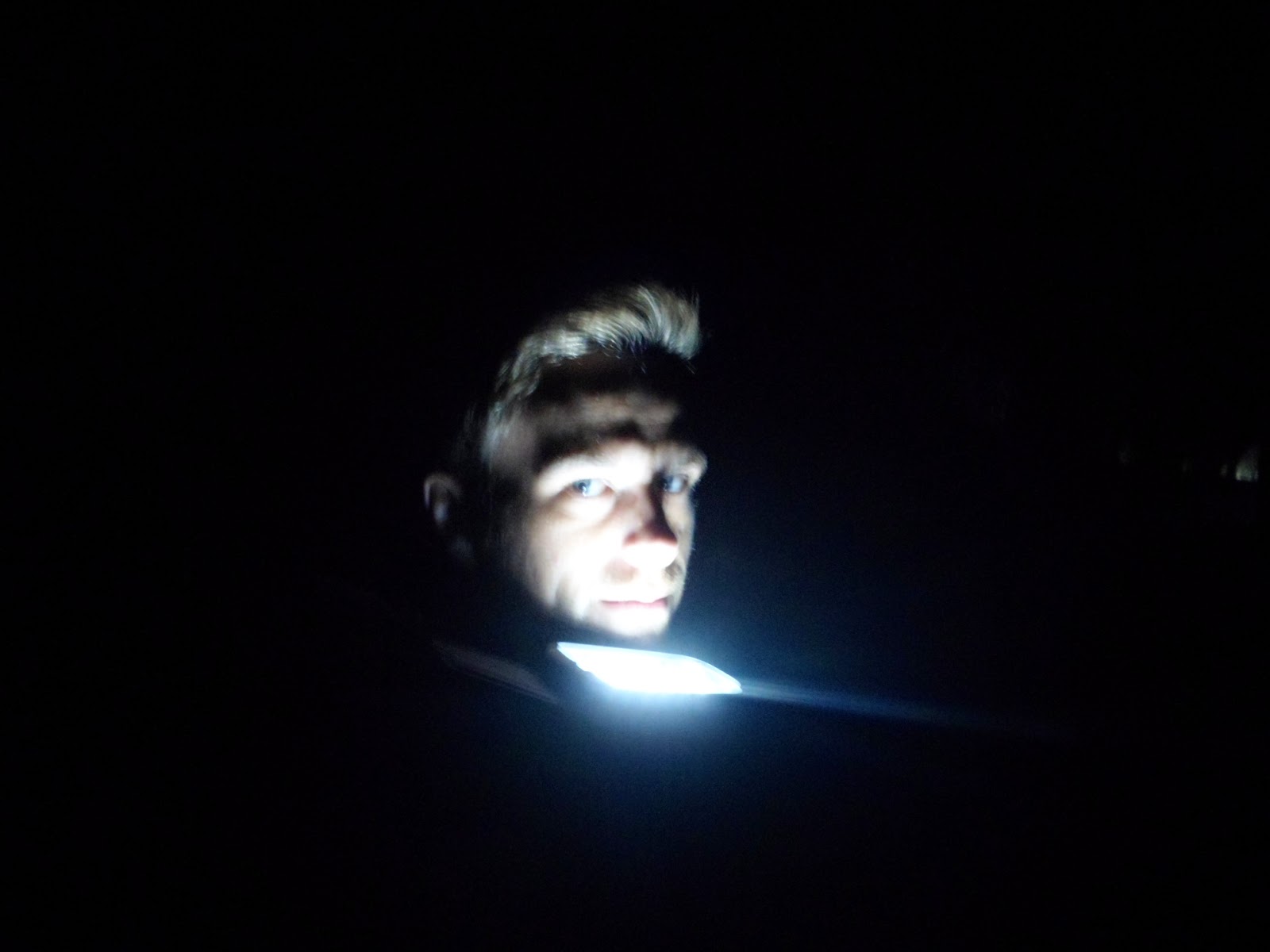 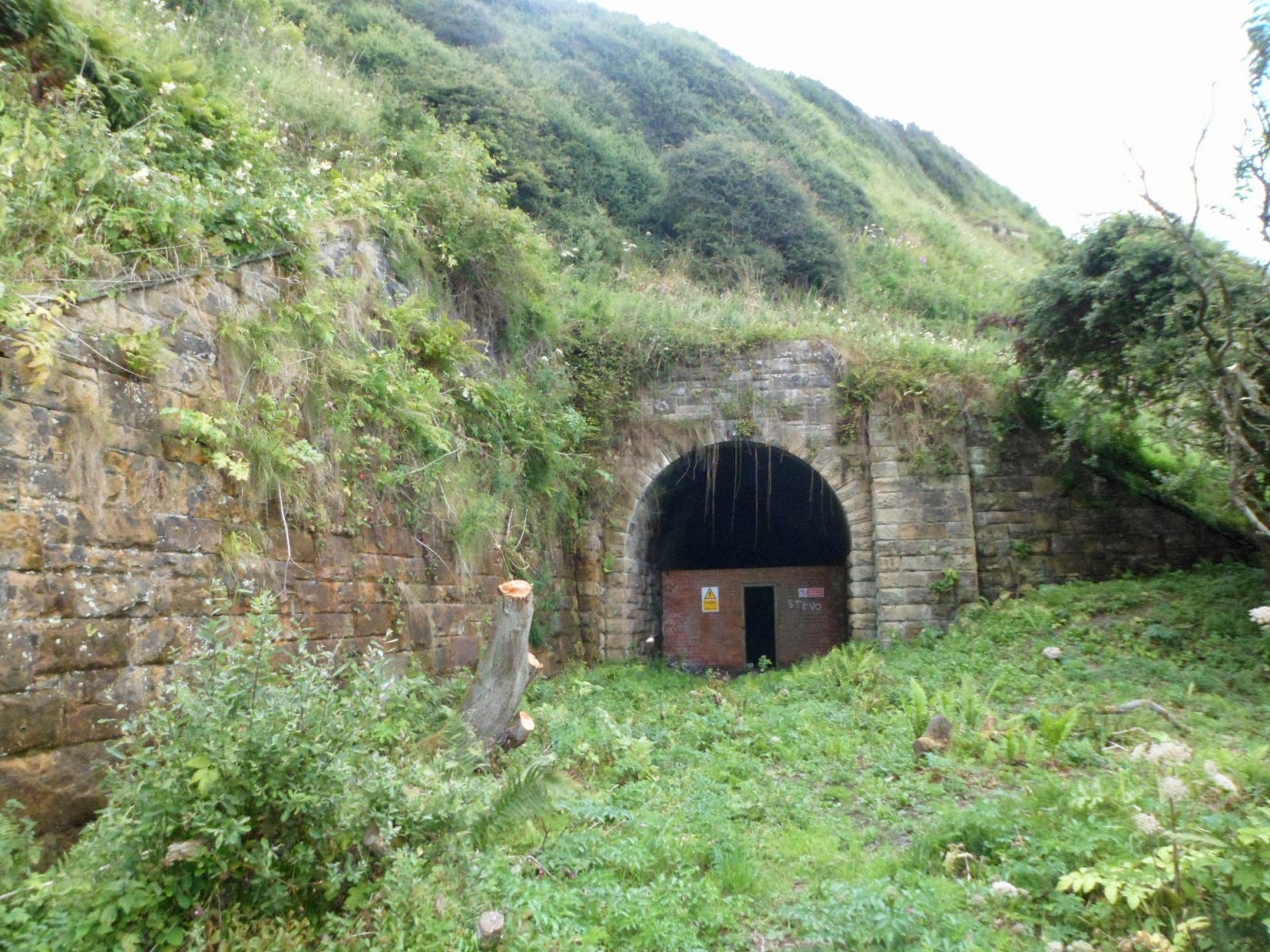 There being no alternative - except perhaps abseiling - we turned back and headed once more, through the darkness to the car.

Back in the sunshine I think we entered some sort of alternate reality, where the world seemed to have slightly shifted - perhaps the darkness had messed with my mind, but everything seemed just a little surreal. Or maybe it was when I lobbed the dead partridge over the cliff? Who knows? 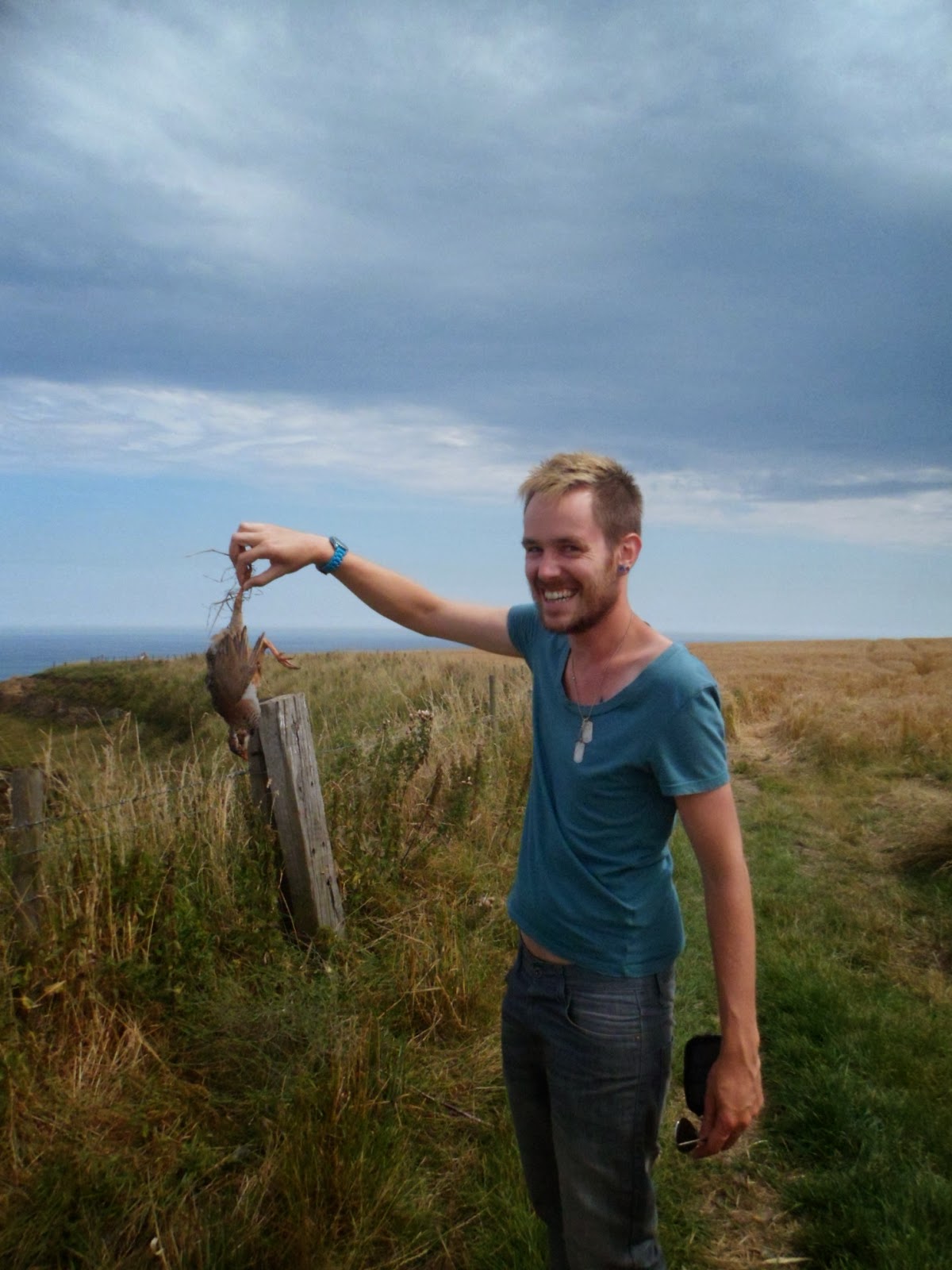 We drove a bit further north and ended up in possibly the least politically correct scarecrow festival ever, in Hinderwell. It was like travelling through some sort of Little Britain episode, crossed with The League of Gentlemen, but entirely made of papier-mache and straw. I suppose that's the great thing about rural Yorkshire villages - they're far enough away from civilisation that they can embrace their weirdness! 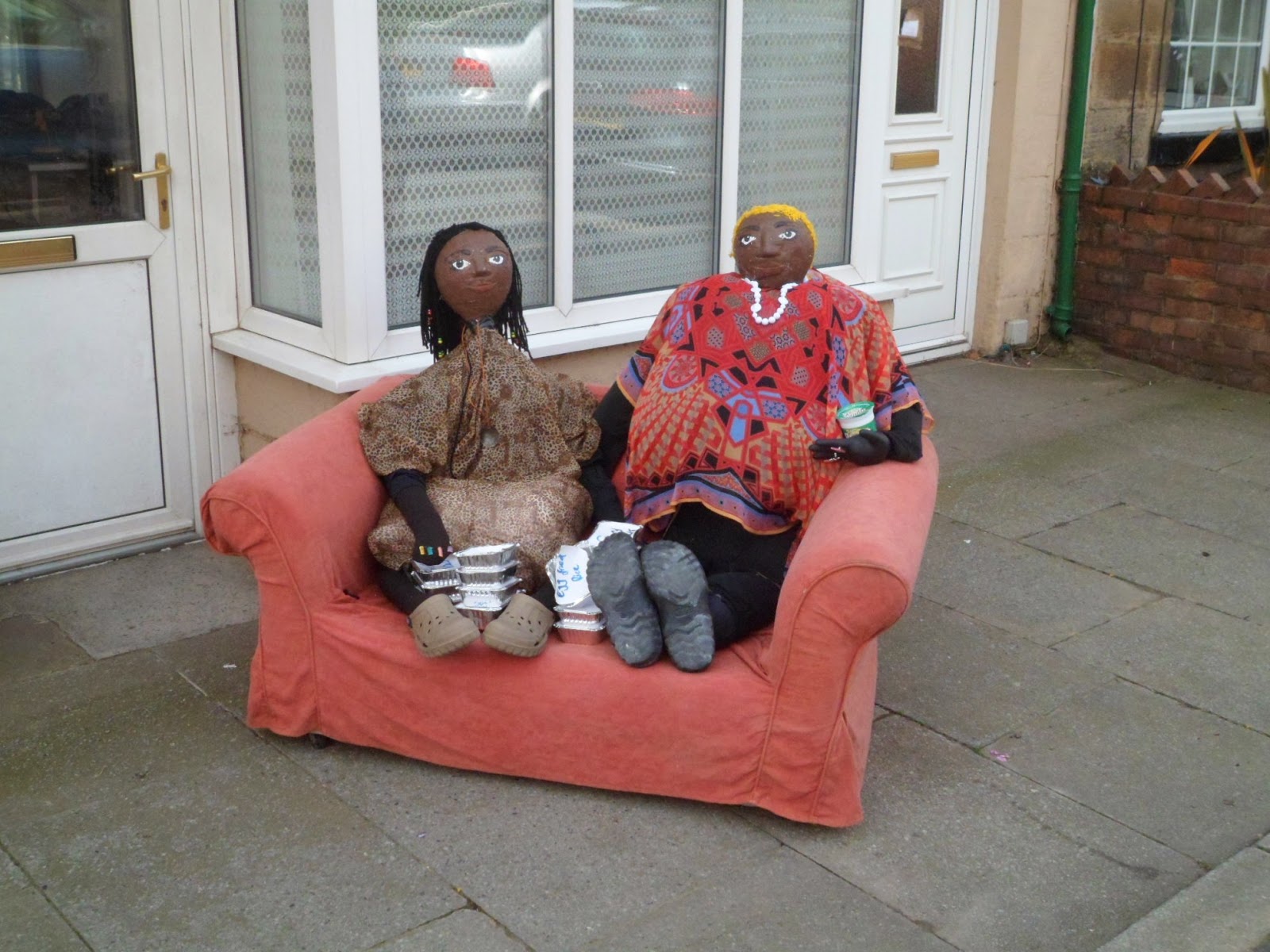 Sadly the butchers had run out of normal pork pies, but the pork and apple ones I bought instead were an adequate substitute, and, of course, who can fault a place where you're greeted outside the fish & chip shop by a nightmarish vision of a shop dummy, blacked up to look like Diana Ross (presumably?) wearing a cheap jokeshop Afro-wig? 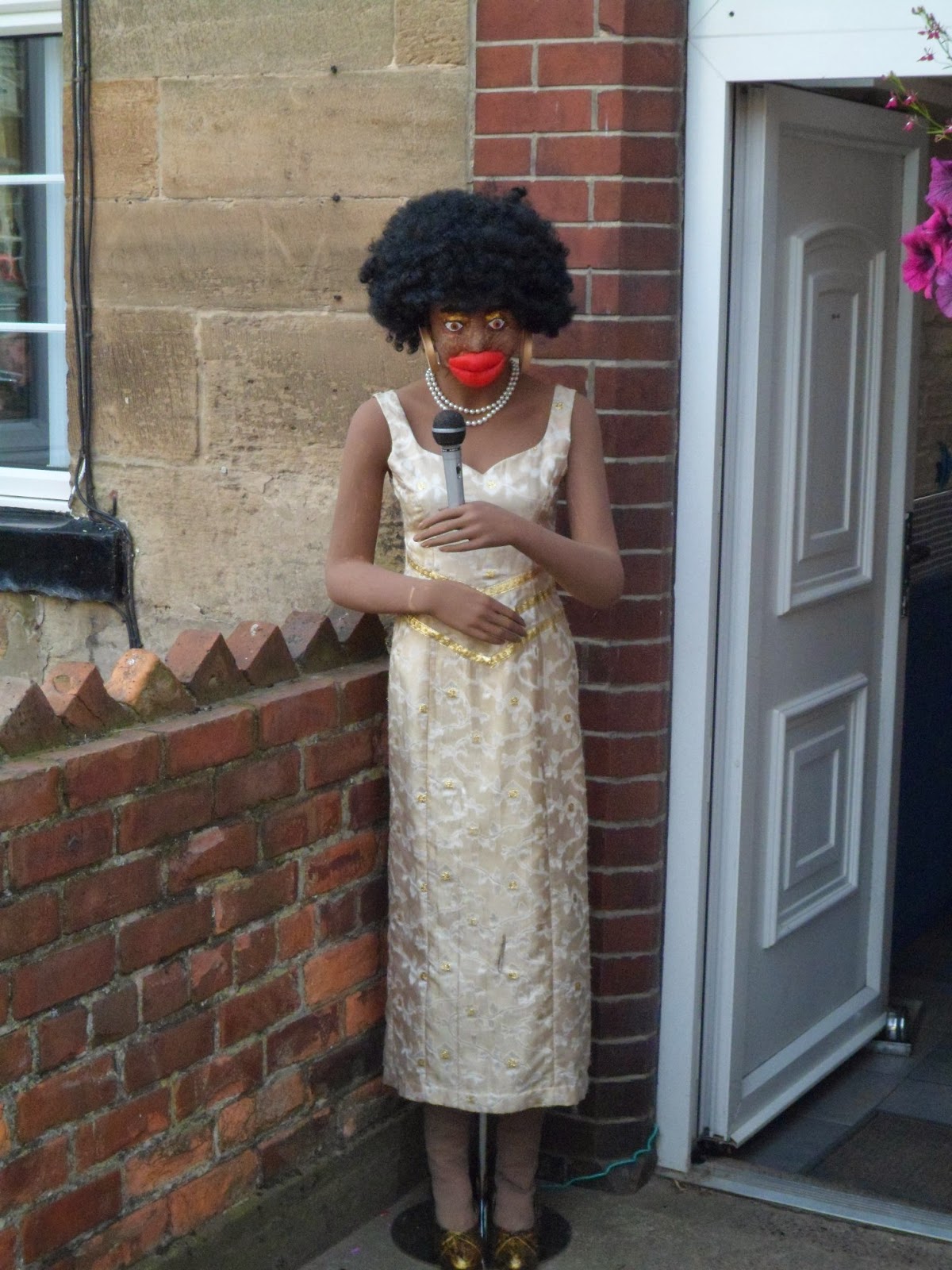 This will haunt my dreams... 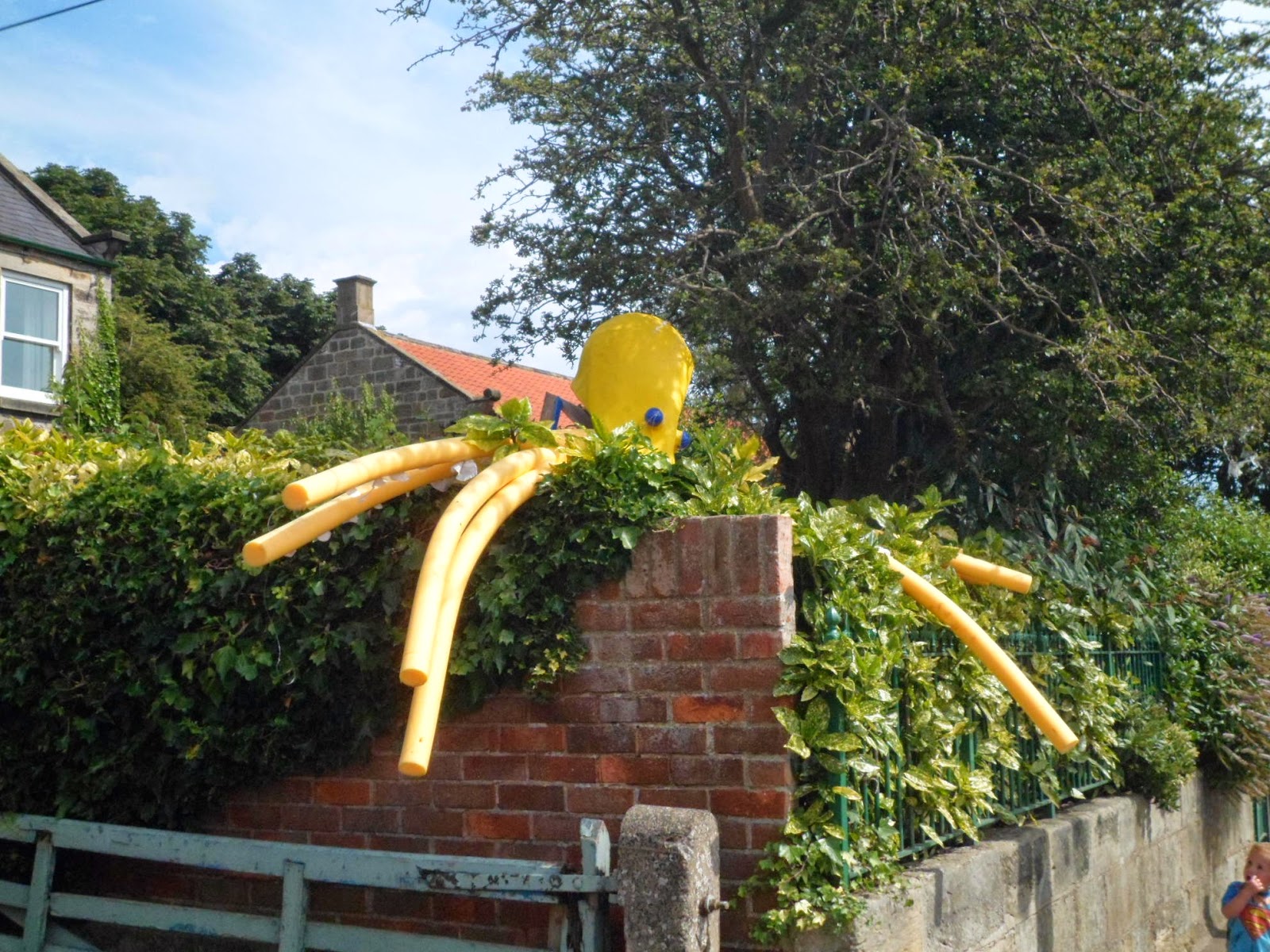 We abandoned the car for a while, and walked along the main street towards Port Mulgrave - pausing to admire a rather splendid scare-octopus perched on top of a privet hedge.

Port Mulgrave is virtually a suburb of Hinderwell these days, but originally it was built to house the miners who worked ironstone out of the cliffside quarries. The ironstone was then shipped off from the harbour to be taken to blast furnaces elsewhere in the country. The quarries are all abandoned now, so the harbour is now falling to ruin. 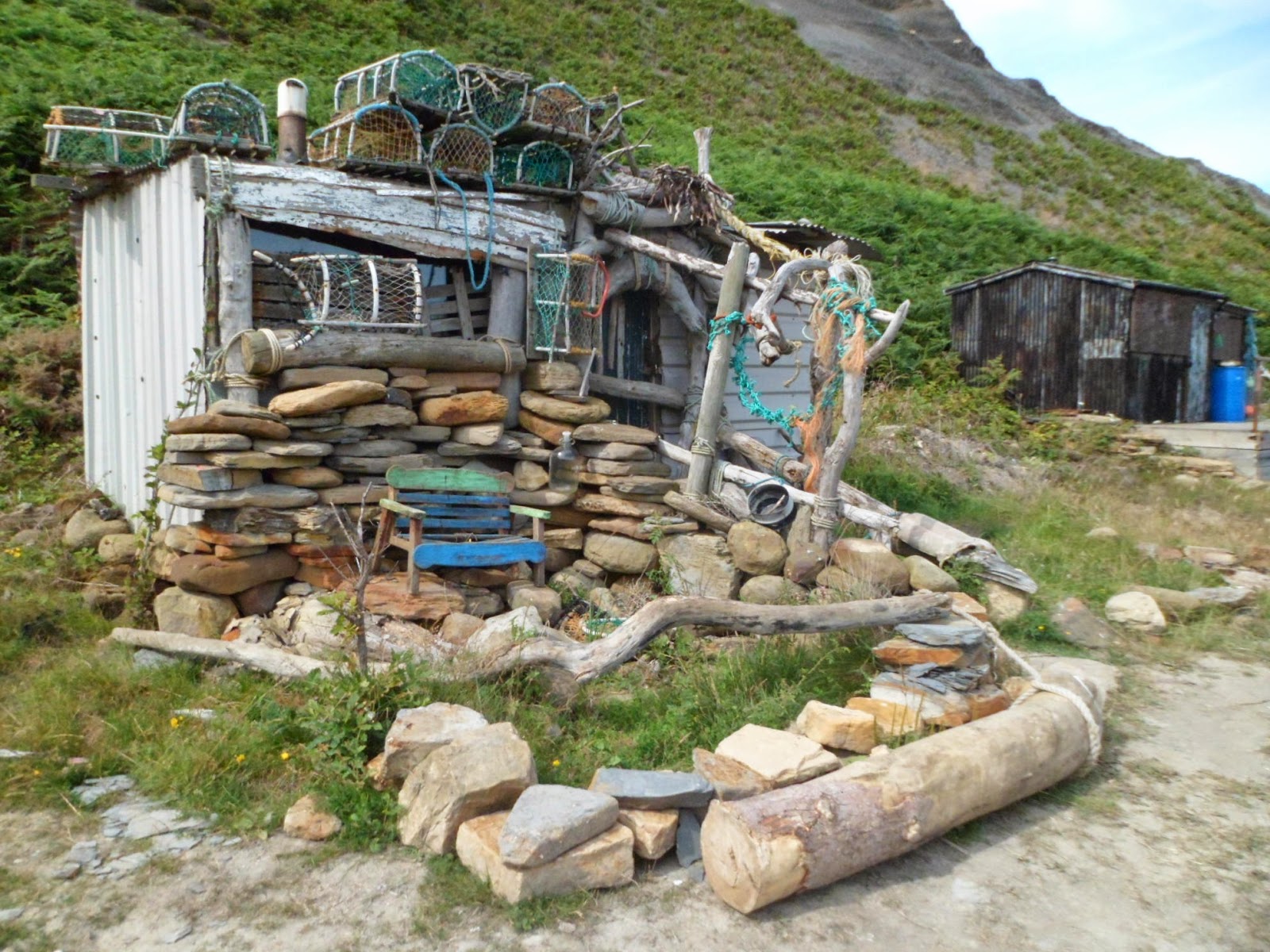 A few fishing boats appear to be still based there, and the fishermen's huts are a curious collection - if they were taken away and reconstructed at the Tate Modern people would pay a fortune for them as works of art - but thankfully, here they remain, paint bleaching in the sun and salt-air, slowly collapsing into the bracken.