Wanderings with a Goth

A pleasant - almost summery - stroll along the coast last Tuesday. It started off badly though - the bus was late arriving, so I had to queue up for over half an hour with a horde of whingey pensioners. Luckily, for once I had actually remembered my i-pod so I couldn't hear them moaning, and my head was filled with the delights of Pitbull, Nina Simone and obscure ABBA b-sides. There's something quite amusing sitting on the top deck of a bus crossing the North York Moors to the sounds of "Summer Night City".

Eventually, after what seemed like an age, my bus finally arrived in Robin Hood's Bay, and I was greeted by Gotho waiting for me in the bus shelter. We had a quick explore round the lower village first - Gotho was very impressed with the tank of crabs in the Coastguard Station, and I bought a book about Spain for £2.50 - before heading back up to the old station at the top of the hill. It's quite complete - the station house is now holiday accommodation, the goods shed is used as the village hall, and even the signalbox is still there.

I called in at the Post Office for a pork pie (still not as good as Hinderwell), a Yazoo milkshake, and an onion bhaji (breakfast of champions!), and we made our way onto the old rail track. The route is very scenic, with views of the sea, and lots of sheep and cows and the like, and Gotho seemed to cope quite well despite him not being the most rural of persons. The only down side to the nice weather was the hordes of shagging flies, which kept landing on me - perhaps to them I look erotic? They weren't so taken with Gotho - although, as he was (obviously) entirely clad in black, I probably wouldn't have noticed them anyway.


The second station of the day was at Hawsker, which is now a cycle-hire business - the bikes are stored in old carriages alongside the platform, while another carriage is used at a holiday let. They've done quite a nice job of renovating the place, but it would be a lot better if it was still an actual railway line, 'cos then I wouldn't have to go on the bus! Oh well - it's another one to blame Doctor Beeching for.

Hawsker was roughly the halfway point of the day, so after some sniggering at Scabby OS map informing us we were in the parish of "Hawsker-cum-Stainsacre" we headed onward toward Whitby. The line at this point swings inland, past the village of Stainsacre, before gradually descending into Larpool Woods. 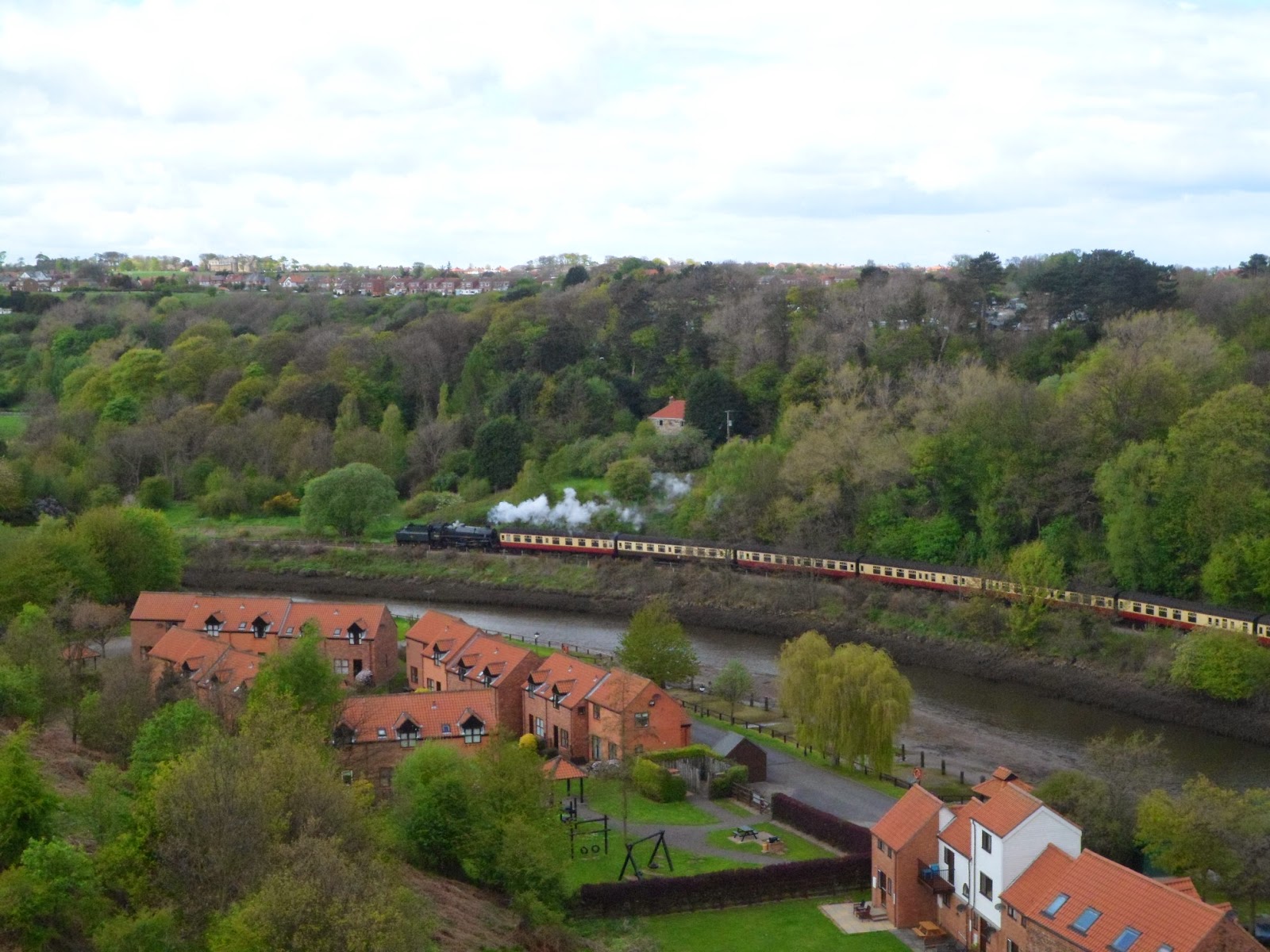 My pace quickened at this point, as I wanted to see the 14:00 train pass under the viaduct (I am that cool), and we made it just in time! Hurrah! We then crossed the river, and continued along the trackbed until it peters out, on a high embankment overlooking Stakesby Vale.

After a short visit to Gotho's flat to drop some things off, it was time for a late lunch at The Resolution. I had the New York burger, and Gotho had the gluten-free smoked kipper fish pie, and some wine (obviously). Probably not the healthiest option, but bloody good all the same, and I think I had earned it.